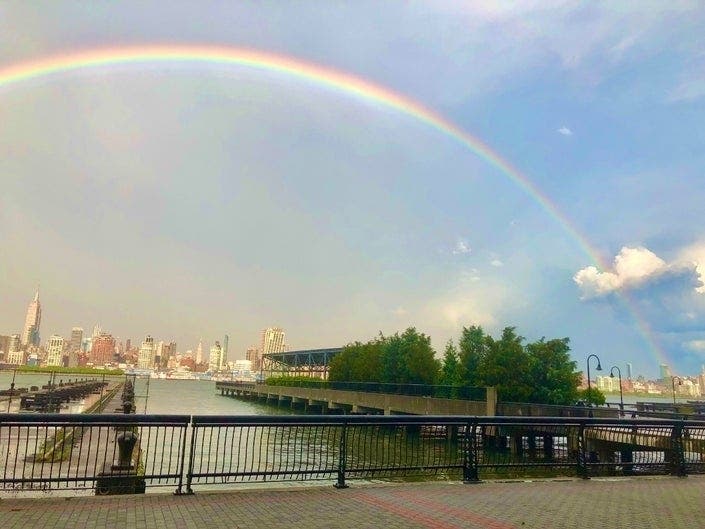 It’s Independence Day weekend, so what better time to celebrate the independent spirits of a group of senior citizens in Illinois who just “want to live.” They’ve spent four months alone in their apartments, chased into seclusion by the coronavirus pandemic.

They’re waiting out the scourge as other residents of their state rush to reclaim daily routines. They’re finding ways to entertain themselves — playing bingo, blackjack, “Wheel of Fortune” and other games in the halls of their assisted living complex — but missing out the chance to be out and about.

Is the sacrifice worth it? You bet it is.

Here are 10 more stories celebrating you — for your genuine kindness, your feisty entrepreneurship and your love for a good mystery.

Independence Made Her A Pioneer

Some 22 years ago, Gina Laschiavo wanted a job no other woman in her area of New Jersey had ever held. She wanted to be a cop. She had to sit on a couple of phone books in “old boat” of a patrol car she was first issued. She grew in the job — not physically, but professionally — and when she retired, she called her career “a wonderful journey of me growing up, not only in my personal life but in my blue family as well.” By Alexis Tarrazi for Basking Ridge Patch

Independence Day Lemonade With A Twist

For four years, now 12-year-old Lucas Oskwarek has spent Fourth of July at his frozen lemonade stand in Middleburg, Connecticut, often with his dog, Boston Terrier Bailey, as his sidekick. Last year, he made just over $300 in a day, but this year, the coronavirus scuttled his plan. He wasn’t daunted, finding a way go virtual with his stand — and do something good for his community. By Ellyn Santiago for Woodbury-Middlebury Patch

Many of June’s Pride month festivities were canceled by the coronavirus. A double rainbow arched across the Hudson River in Hoboken, New Jersey, last weekend as June was drawing to a close, and it’s almost as if Mother Nature knew just when to step in. By Caren Lissner for Hoboken Patch.

It’s been a difficult two months for Joshua “Josh” Funk and his family of Reston, Virginia. First, Funk’s wife got sick with the coronavirus. Then one of his four children started showing symptoms a doctor later said were due to strep throat. His son also got antibiotics for strep. His 7-month-old twins stayed healthy, but were teething. And then Funk got sick. The community rallied around him. By Michael O’Connell for Reston Patch

How Do You Say ‘Thank You’ For This?

Doreen Williams, a 48-year-old Long Island nurse, was terrified when she was diagnosed with COVID-19. So were the people who loved her, from her mom who fretted away too many pounds, right down to her baby cousin. She spent two months in the hospital, and when she came home, she was given a full police escort home. “I felt like a queen,” she told Patch. By Lisa Finn for Riverhead Patch

Young children may not remember the coronavirus shutdown, but a photographer in Gaithersburg, Maryland, is doing his part to record it by joining hundreds of others in what’s called “The Front Steps Project.” Jerry Frishman told Patch the photos he’s snapping “create a sense of community,” but also “capture a moment in time that hopefully never happens again.” With a catch in his voice, he added: “Parents with younger kids, they want these shots for the record. The little kids might not remember 25 years from now, but they’ll have pictures to show that. By Alessia Grunberger for Gaithersburg Patch

Darius Brown Jr. has already gotten a big nod of approval from former U.S. President Barack Obama for his heartwarming dog bow ties, which help attract attention for shelter animals at risk of euthanasia. Now, the Newark13-year-old has earned another accolade he and his community can hold their heads high about: The Diana Award, established in memory of the late Princess Diana. By Eric Kiefer for Newark Patch

It was a tough call for Stacha Madsen when she had to lay off her own daughter and other workers at her St. Petersburg, Florida, coffee shop. “She’s my best friend in the world,” Madsen told Patch. “And it was a double whammy because I had to lay her off as an employee, and I couldn’t help her with the bills because I wasn’t generating any income.” They decided to stay positive that it would all work out. It did. By Skyla Luckey for St. Pete Patch.

The dream for Iowa’s first Major League Baseball game is still alive at a ballfield in the middle of a pretty famous cornfield, but the cast has changed for the anticipated Aug. 13 game thrown a curveball by the coronavirus. The Chicago White Sox and St. Louis Cardinals are now scheduled to face off in the temporary but regulation 8,000-seat stadium overlooking the “Field of Dreams” movie site on a farm near Dyersville. By Beth Dalbey for Across America Patch

And Finally, A Mystery

No one knows who, or what, knocked over a 117-year-old cairn at the remote peak of Rincon Mountain overlooking Tucson, Arizona. But it is what once lay concealed in the rocks that nags retired U.S. Forest Service Ranger John Williams: He claims that the cairn contained dozens of mementos, including military medals and handwritten notes left behind by generations of pilgrims ascending the overlook of the Tucson Valley. By Danny Wicentwoski for Tucson Patch