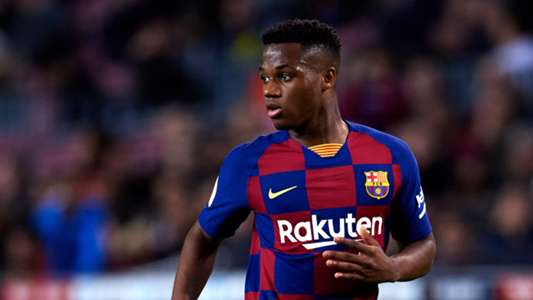 Barcelona coach Quique Setien insists he’s not blaming Ansu Fati after the young star was shown a red card in his side’s 1-0 win over Espanyol.

Fati was brought on as a substitute in the second-half with the game still goalless but just five minutes after coming on, the teenager was heading off again, a VAR review upgrading his caution to a red card as he was punished when a high right foot caught Fernando Calero.

Barcelona still managed to grind out a narrow win courtesy of a goal from Luis Suarez and Setien was pleased by Fati’s reaction to his sending off.

“He was very humble afterwards,” Setien said of Fati. “He came to talk to me. He felt very bad about what happened.

“He wasn’t provoked. He went in to win the ball. After I watched it, the challenge looked harder than it actually was. It’s a moment that could have been avoided. When he goes to win the ball I saw he tried to fold his leg back so there wouldn’t be any contact, but the decision was made.

“He’ll be affected by this and we’ll see what the punishment is but it’s a moment that I don’t blame him for.”

Setien was full of praise for Suarez, who arrived from Premier League giants Liverpool in 2014.

“It wasn’t difficult to figure out Luis Suarez was eventually going to score goals again as he continues to play games,” Setien told reporters.

“When you’re not playing for a while you need time to get back into your rhythm. That’s something you only get through minutes on the pitch.

“He knows how to score goals and he’s always showed that throughout his career. He did it, which moves him up to third in Barcelona’s all-time scoring list and you can’t take that away from him.”

Barca moved within a point of bitter rivals and leaders Real Madrid, who have a game in hand as they prepare for Friday’s match against Deportivo Alaves.

Setien’s Barca are nine games unbeaten following back-to-back wins, though they were far from their best after Sunday’s 4-1 rout at Villarreal.

“I think we certainly weren’t brilliant,” Setien said. “It was a difficult match. We managed to win and we’d all like to repeat, of course, the same performance we produced against Villarreal but it’s not easy.

“You always need to take your opponents into account. In any case, I’m very happy with the win because I watch practically all the matches in La Liga and I see a lot of teams are winning 1-0 and finding it a struggle. It’s a very level playing field right now.”