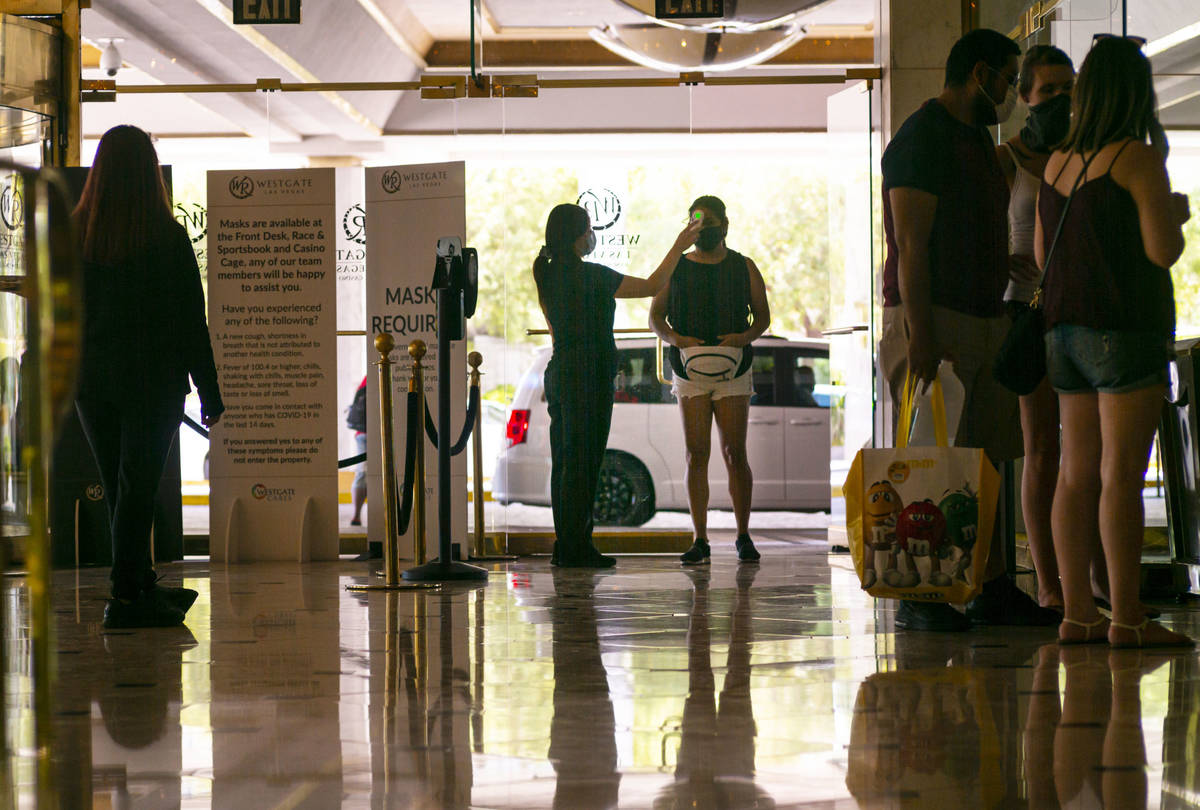 At Red Rock Resort, there’s a separate line for Chairman-level players club members — much like there was at the buffet, back when we still had buffets — to shorten the wait for screenings.

On Fremont Street, patrons are registering body temperatures in the hypothermia range, mere steps away from the triple-digit heat outside.

There are no standards for how, or even if, Las Vegas casinos check their customers for fevers to try to halt the spread of the coronavirus.

Every operator has a different procedure.

As a result, the act of entering a local casino — put your right wrist up, pull your mask down, look at that camera, stand on that dot — is playing out like a game of the COVID hokeypokey.

Only hotel guests must be checked

When it comes to temperature screenings, the Nevada Gaming Control Board only specifies they be given to hotel guests upon arrival. Those can be avoided entirely if guests complete self-assessments of their symptoms, as long as the hotel has a medical professional on property at all times.

Nowhere in the board’s reopening guidelines does it say anything about checking the temperatures of the thousands of customers, any of whom could be symptomatic, who enter casinos each day to gamble, eat or drink — or sit near you while you do the same.

Informal visits to 40 casinos across the valley last week showed people could enter the gaming floor without fever checks at numerous properties, including every reopened resort owned by Caesars Entertainment and MGM Resorts International.

An MGM representative didn’t provide a reason for the company’s policy, while a Caesars spokesman would only say, “Caesars is following state directives everywhere we do business.”

“Our highest priority right now is protecting the health and safety of our team members and guests,” a Boyd representative said in a statement. “Universal temperature checks are just one more way we can demonstrate our commitment to meeting and exceeding the standards set forth by health officials and keeping everyone safe in our buildings.”

While beneficial, a temperature check is far from a perfect solution when it comes to limiting the spread of COVID-19.

“It will find people who are currently ill with a fever, but not everyone has that,” epidemiologist and UNLV professor Brian Labus explained. “Half the people (with the coronavirus) don’t have symptoms, so off the bat, you’re not going to find at least half the people that are infected. Then out of those who do have symptoms, not everyone has a fever. … It will screen some people out, but it’s not going to find the majority of people, actually, that have an infection.”

The screenings, though, are the best option available on a large scale to help weed out those who may be carrying it, said Dr. Paul Kalekas, chairman of the primary care department at Touro University Nevada.

“There’s a lot of things about this virus that we just don’t know. What we’re dealing with is percentages. So what you want to do is, with the least amount of restrictions, get the greatest percentage of capture” of people with an illness.

Every casino for itself

With no industry standard, it’s up to each casino owner to decide what’s best for that property.

This means that, while downtown’s Fremont was limiting its number of entrances and greeting every customer at the door with a temperature screening, the Four Queens across the street had every door wide open and wasn’t checking visitors.

On the Strip, the MGM and Caesars properties weren’t alone in just screening hotel guests. That also was the case at The Strat, Sahara, The Cosmopolitan of Las Vegas and Treasure Island. While the latter wasn’t scanning visitors, you had to submit to a handheld temperature gauge to get inside the privately operated Avengers S.T.A.T.I.O.N. attraction, or even its gift shop, both of which are located just off the casino floor.

At Wynn Las Vegas and Encore, as well as The Venetian and Palazzo, guests can be screened several at a time, usually without slowing down, by thermal imaging cameras that give the operators a “Predator”-style look at everyone who enters.

Boyd properties — including Aliante, the Cannery, Gold Coast, The Orleans and Suncoast — and Station resorts — including Green Valley Ranch, Red Rock, Santa Fe and Sunset — take more of a stop-and-wait approach. Guests are asked to space themselves out on social distancing markers until they arrive at the scanners, at which point they may be asked to stand at a specific spot and briefly remove items including masks, hats and even glasses to get an accurate reading. It’s not unlike the process of being photographed at the DMV.

Downtown, the California and the D rely on machines that scan the inside of guests’ wrists, with the latter registering skin temperatures in the dangerously low 90s. The Plaza offered the choice of presenting your forehead or wrist, although if your forehead ran warm, your wrist needed to be scanned anyway.

The longer you’re out in the Las Vegas heat, the warmer your exposed skin will register. Those scanners only read the temperature of your skin, which isn’t a true indicator of your body temperature.

“Your skin temperature is affected by the environment,” Labus noted. “That’s why we put a thermometer in your mouth.”

Even though 98.6 degrees has long been considered a “normal” temperature, healthy people can regulate between 97 and 100 degrees, Kalekas said. When casinos deny entry to people with a reading at or above 100.4 degrees, he said that’s because 99 percent of the population will not fluctuate that high without having a fever.

Every casino can adjust those recommendations, though, and can ask anyone with even a slightly elevated temperature to step aside and try again.

At Green Valley Ranch, for example, a reading as low as 99.1 degrees on a handheld scanner — following high measurements by thermal imaging and a second camera that zooms in on a guest’s face and detects the heat signature coming off it — is enough to have you taken to a chair where you’ll sit, drink a complimentary bottle of water and wait to cool down.

Or, if you’re like that guy at the Cannery who registered a high temperature last Thursday, you can throw up your hands and storm off before the security guard can even finish reciting the safety procedures.

“It’s not providing a shield at the door that keeps all the sick people out,” Labus said of temperature screenings. “I know that’s the hope, but it’s not really what it’s doing.”

The professor, who spent 15 years as a senior investigator for the Southern Nevada Health District, stressed that those fever checks are part of a comprehensive approach casinos are taking that includes social distancing measures, plexiglass barriers, mandating masks and increased cleaning.

As flawed as the system may be, universal temperature screenings are still beneficial.

I visited 40 casinos in three days.

As with many Las Vegas adventures, the strangest moments happened downtown.

On my first stop, fresh from my air-conditioned car, I registered a whopping 100.9 degrees at the Fremont, by far my highest reading at any casino. After being asked to step back for less than a minute, with cooling grates above and below me, I tested at 97.9 and was allowed inside.

At the Downtown Grand, one of the employees in charge of screenings was turned around talking to someone. Once I got her attention, she used a handheld device to tell me I was at 99.5. Had I registered any higher, she said, I would have had to wait to cool off.

Things went off the rails, though, at the D.

After holding my wrist up to the contraption that looks like a metal detector, I asked how I did.

When I said that seemed improbable, the security guard used a portable scanner that read 95.9 degrees.

It was 104 degrees outside.

Shortly after that, one guest measured 93.8 degrees. Another registered 85.1

For the record, hypothermia begins to kick in below 95.