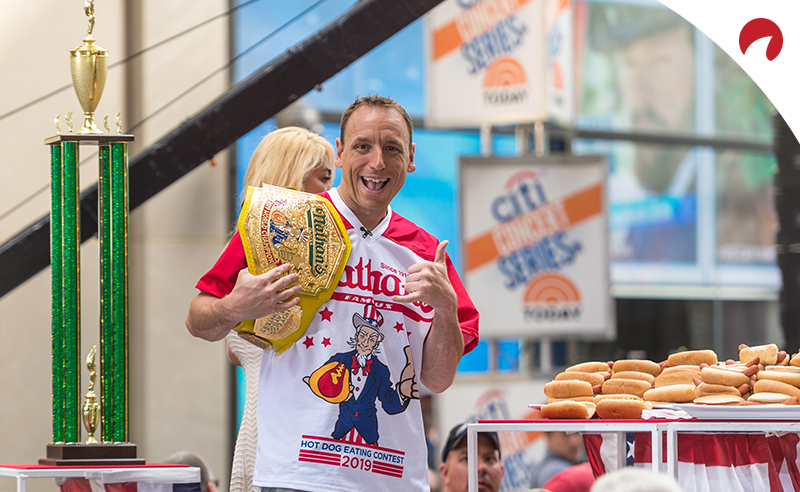 The first Nathan’s Famous hot dog eating contest took place on July 4, 1916, and this Independence Day will celebrate the 104th challenge of scarfing down weenies. Joey “Jaws” Chestnut has won 13 Mustard Belts over the last 14 years and is the heavy favorite to swallow up his competition. On the women’s side, Miki Sudo attempts to be a seven-time champion.

Online sportsbook Bovada has a full list of prop betting odds for you to wager on. Most notably, Chestnut has odds of -1100 to win the Mustard Belt with the field having +575 odds, while for the women, Sudo is a -750 favorite with the rest of the field coming back at +415.

World Records May Be Gobbled Up

Bovada has listed the total number of hot dogs eaten by the winner at 72.5, the record, held by Chestnut, is 74 franks (with bun) and that could be in jeopardy.

Odds as of June 20 at Bovada

This year’s Nathan’s Famous hot dog eating contest will look quite different from what we are accustomed to in the past. Normally, a large stage would be set up on the Coney Island boardwalk with upwards of 40,000 onlookers. This year, the consumption of hundreds of dogs in just a 10-minute span will take place in a private indoor facility in the same area because of the COVID-19 pandemic.

This change in venue may be a beneficial one because it is air-conditioned perhaps giving a little more drive for the competitors that are typically dosed in sweat as their bodies battle the heat and the copious amounts of salt and “pork” ingested.

Betting on either Chestnut or Sudo to be the outright winner isn’t a bet you will be sweating out for 10 minutes, with both being pegged as the large favorites. Barring any injuries, a missing plate or they simply run out of franks to chow down, those two should eat their way to victory once again.

However, the margin of victory can be a little more exciting and could get you a better bang for your buck in addition to your OVER/UNDER wager. Bovada Sudo is a 6.5-dog favorite over Michelle Lesco, while Chestnut is a whooping 15.5-weenie favorite over whoever finishes second.

Last year, Miki Sudo downed 31 hot dogs which was 4.5 more than second-placed Michelle Lesco, so barring a massive change year-over-year Lesco at +6.5 could be a good wager.

For the men, it was a complete beatdown by Jaws, devouring 71 weiners with Darron Breeden putting away a measly 50, I think a spread of -15.5 in these more controlled conditions is a gift.

By now, if you doubt Joey Chestnut’s ability to scarf hot dogs, you haven’t been paying attention. Chestnut recently said in an interview with TMZ that downing 77 hot dogs is doable and being in an air-conditioned facility should aid his quest to breaking his world record of 74.

Another reason why the OVER is a lock is less competitors in 2020. Unlike previous years, where 15 competitive eaters flocked to Coney Island, this time it will be only five. Chestnut contends that this will aid in the taste of the weenies, which in turn, makes them more consumable. Considering he’s won 12 of 13 Nathan’s Hot Dog Eating contests and has topped 70 in four straight years, this is not the year to doubt the Bill Russell of competitive eating.

If you agree with Gilles, bet this prop now at:

Taking the OVER for how many hot dogs get eaten in the Nathan’s Hot Dog Eating Contest is an annual tradition and on the women’s side, Miki Sudo is more than capable of devouring 41 hot dogs. Last year’s outing may have thrown some bettors off the scent when she only ate 31 dogs but that was because of her lack of competition.

This time, she’s facing only four other women with the intent of knocking Sudo off her throne. That’s why I think the OVER is a lock-in 2020 for this prop because being in an air-conditioned facility with fewer competitors cannot be overlooked. Also, if you look at Sudo’s past outings, she’s swallowed 38 in 2015, 38.5 in 2016, 41 in 2017, 38 in 2017 and 31 last year. Some would see that as a downward trend but I look at as value and a perfect time for bettors to cash in on a rebound.

If you agree with Gilles, bet this prop now at:

Now, I’ll start this off with nobody likes to bet on the UNDER for the Nathan’s Famous hot dog eating contest, though, it may be the better bet. Sure, Joey Chestnut is doing interviews where he claims he may break the world record as he’s in an air-conditioned room and that the dogs may taste better because of fewer competitors.

I think he’s trying to psych himself up for an event with no crowd. He has been doing some online eating challenges recently and some of his performances have been lackluster. Is he going to demolish the field, yes, will he devour 73 dogs I’m not sure. He’s only topped that mark once in 2018 which may have been his peak, he had three fewer dogs last year and before 2016 he was consistently in the 60’s. I think he’s going to plow 71 weenies into him on July 4.

If you agree with Scott, bet this prop now at:

It truly is a 50/50 shot on whether Miki Sudo will cross the 38-threshold as she has reached that mark in half of her six Nathan’s Famous hot dog eating contests. However, her last two years were UNDER that mark, including last year where she had a career-worst 31 franks, three fewer than her first appearance in 2014 when she put away 34 dogs and 10 off her career-high of 41 in 2017.

She claims the heat impacted her performance last year, but I think she’s in her head and her best days are behind her I’m on the UNDER!

If you agree with Scott, bet this prop now at: