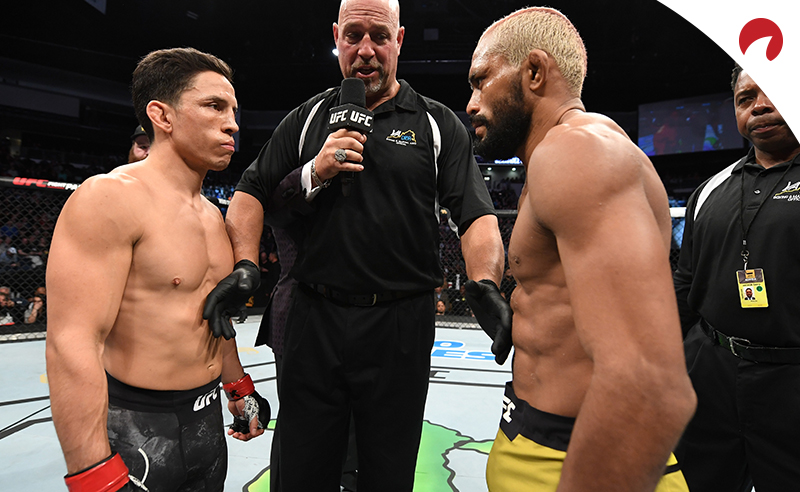 The flyweight division will be in the spotlight for UFC on ESPN+ 30 or Fight Island 3, the third event on Yas Island, after three titles were on the line at UFC 251.

Deiveson “Daico” Figueiredo and Joseph Benavidez will meet again for the flyweight strap in the main event after clashing in February, when Figueiredo scored the second-round knockout victory.

Online sportsbook Bovada has released odds for this rematch and has listed Figueiredo as a -205 favorite with Benavidez coming back as a +165 underdog.

New to betting on the UFC? We have you covered with our fantastic betting guide to help you feel comfortable laying a wager on the fights. Additionally, be sure to check out our UFC odds page for the latest up-to-date betting lines.

That first fight saw Figueiredo win in the second round, but he was unable to win the belt because he missed weight by 2.5 pounds. Now we see a flip in the odds from their first meeting in the main event of UFC Fight Night 169, when Benavidez closed as the -155 betting favorite and Figueiredo came back as a +125 dog.

It is quite rare to see plus odds for Benavidez, who has been an underdog only twice in his UFC career, first in his rematch with Demetrious Johnson and then against Alex Perez in 2018. As for Figueiredo, the -205 line is the shortest of his eight-fight UFC career, with his previous low being -185 against Tim Elliott ahead of the Benavidez fight.

How Will Benavidez vs Figueiredo 2 Play Out?

Perhaps it was the weight cut or lack thereof, but Figueiredo looked like the much bigger man in the cage in the first bout and he imposed that size on Benavidez, pressuring and bullying him. Benavidez did look like the quicker of the two but he simply couldn’t get any offense going and nearly got submitted very early in the match. On the feet, he was lunging in with his punches and dipping his head, while Daico was simply standing his ground and meeting him with a stiff punch.

Eventually, a clash of heads really hurt Benavidez and Figueiredo capitalized to put him away. I think we are going to see a very similar fight in the rematch with Daico bullying Benavidez, countering his strikes and looking to put him away.

That said, I think if Benavidez can use his footwork more this time around to create angles and drag Figueiredo into the later rounds, he could pick up the pace as the bout progresses and dig out a decision win.