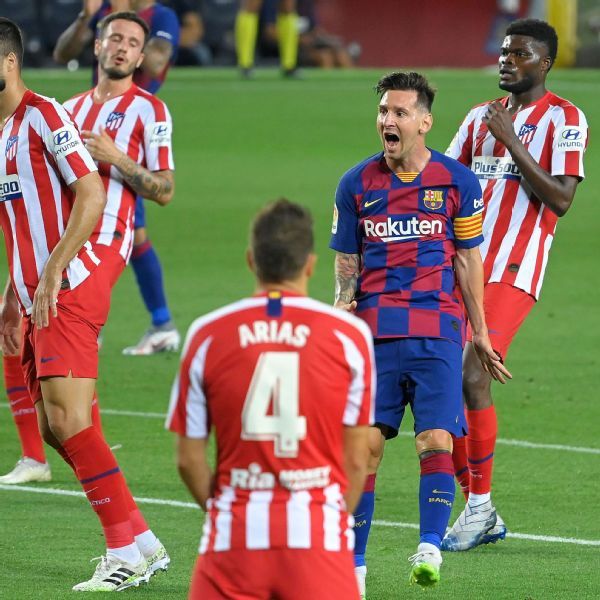 Barcelona and Atletico Madrid played to a 2-2 draw at the Camp Nou on Tuesday night in a match that saw three penalties converted and an own goal make up the final scoreline.

The game saw Lionel Messi net his 700th career goal for Barcelona and Argentina, but the result means more dropped points for La Liga’s defending champions as they are one behind first-placed Real Madrid, who have a game in hand against Getafe on Thursday.

The two sides traded goals inside the opening 20 minutes with a Messi corner kick finding its way into the back of the net off the leg of Diego Costa for an own goal.

Minutes later, Saul Niguez levelled from the penalty spot after Marc-Andre ter Stegen was adjudged to have left his line early by VAR on his initial save from Costa’s effort.

Messi nearly scored on 22 minutes, but his curling effort from the right side of the penalty area only clipped the far post.

Jan Oblak parried a Messi free kick from outside the penalty box away just before half-time as the teams went to the dressing room locked in a 1-1 draw after an entertaining first half.

Messi’s 700th finally came early in the second half when the Argentine beat Oblak from the penalty spot with a cheeky chip to give his team a 2-1 lead and become just the seventh player in football to reach that mark.

Atleti drew level in the 62nd minute with yet another penalty, Saul converting his second of the night after Yannick Carrasco was tripped by Nelson Semedo, who had just drawn the foul for Messi’s penalty earlier in the half.

Both teams pushed for the winner, but none came, meaning Barcelona could be as many as four points out of first after Real’s match on Thursday. Atletico Madrid are in third place, two points ahead of Sevilla, who beat Leganes earlier in the day.