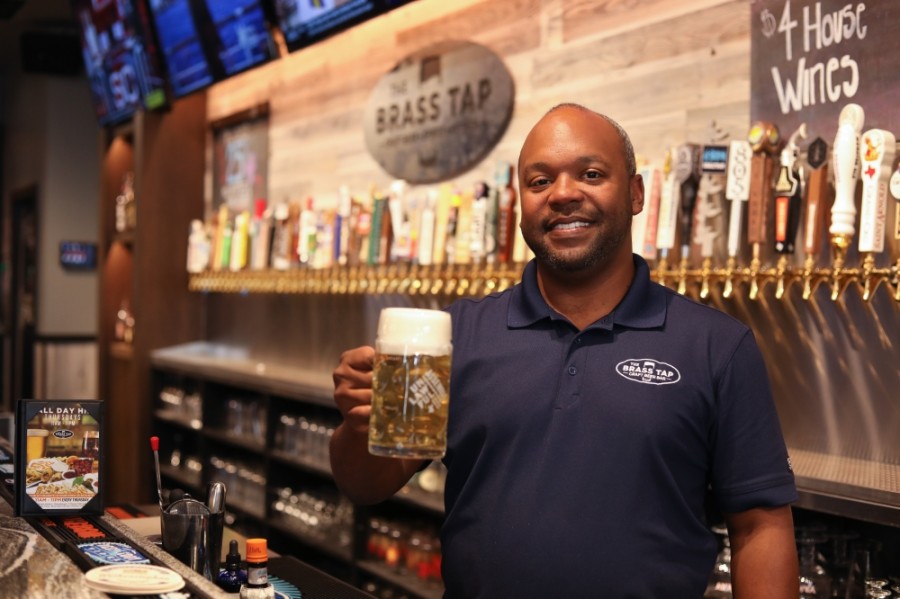 When owner Dale Volley and his wife, Anna, decided to bring The Brass Tap to Highland Village, their goal was to bring a cozy, neighborhood hangout to the community.

“We thought this area needed something where adults and even some families [could have] just a nice little niche spot,” Dale said.

Since opening on Memorial Day in 2019, The Brass Tap has created weekly events to keep that vibe alive, including trivia nights, music bingo and happy hours, among others.

“It’s something other venues don’t really do, so that kind of helps set us apart from other places,” Dale said. “[We] o er a little bit more entertainment.”

Also in its first year of operation, the locally owned franchise has faced the coronavirus pandemic.

The Brass Tap was in the beginning stages of creating takeout services when restrictions were first put into place, Dale said.

“We had to basically fast-track [takeout] overnight,” he said.

The pandemic also forced Dale to rethink The Brass Tap’s entire concept. Where there were once trivia nights, family meal deals and to-go growler-pours were added.

The community has shown up for The Brass Tap during the pandemic, with guests encouraging them to make it through as they ordered and picked up food, according to Dale. Those interactions would have been impossible without the relationships The Brass Tap built over the last year, he said.

“I was a little nervous the first week or two, but each week kept getting better,” Dale said.

Now, The Brass Tap is open at partial capacity and is planning to slowly bring back its traditional entertainment. Events like music bingo and trivia are tentatively scheduled to restart in July and August.

While the pub has gotten more comfortable with curbside and to-go business, Dale is eager to return to The Brass Tap’s roots, he said.

“Our bread and butter is still going to be on the premise,” Dale said.