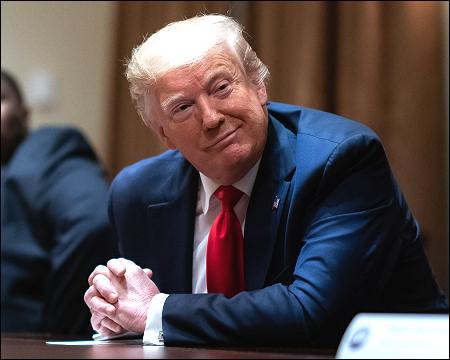 Four very different politicians – all share a certain similarity regarding betting and gambling being a factor in their lives. Nigel Farage, Winston Churchill, Priti Patel, and Donald Trump will be the guys we look at here.

All of these politicians have had, or still do have an affiliation with the gambling industry. One had an awful gambling addiction, one placed two very large successful bets on modern-day British politics. One had a very controversial visit to the famous race track, the Royal Ascot. The other one owned their own casino!

Who are the men behind the names though? Let us enlighten you!

Of course, the owner of casinos!

Trump has had a lot of success in his business life, clearly. It’s quite evident today now that he’s in politics, with ‘billions’ being one of his favorite words. Some of you might now know however, that the casino industry almost bankrupted Trump many years ago. His Atlantic City casinos were built for Kings, yet they hemorrhaged cash like no other casino in the USA.

Not that casino goers cared though, for the slots kept spinning and the cards kept being dealt for several years before a frustrated Trump decided to walk away.

Trump was very hands-on with everything though, you have to give him that. He always ensured that the quality was second-to-none and that the staff were professional, as well as courteous.

For his first bet, the then UK Independence Party leader bet that the United Kingdom would leave the European Union. He reached out and placed a £1,000 bet that the whole of Britain would vote to say ‘au revoir’ to the European Union. The very optimistic Brexiteer went to visit a Ladbrokes store in Moorgate, central London, handing over the four-figure stake. At that time, the betting business was then offering the odds of 5/2 on Great Britain voting in favor of leaving the 28-nation union on the 23rd of June 2016.

Fast-forward three years, the ambitious Farage entered a betting place once again – Star Sports. This time around the former UKIP leader had changed to the Brexit Party, putting in another £1,000 bet. This time he bet on the Brexit Party getting most seats in the European Elections. He won again! Lucky, or a sound judge of the public’s mood? Who knows.

This is not quite as exciting as the others, but it will certainly drive the conspiracy theorists wild.

In 2019, Priti Patel was treated to a luxurious three-day box suite at the Royal Ascot worth £1,100 per day – an ideal view to see the horses! The now Home Secretary was the guest of the controversial Saudi businessman Mazen al-Sawwaf. Who is he and what is he known for, you ask? He has been a mediator to the Bin Laden Group (one of the largest contracting companies in the Arab world).

For countless years, Mazen al-Sawwaf was a close adviser to Bin Laden! Yikes. The edgy businessman was the former head of Bin Laden’s group and even married a non-sister to the evil Al Qaeda leader, Osama bin Laden. Priti Patel said in a record of interest to members of the House of Commons that her hosting at the British Royal Festival cost more than £3,000.

Edginess aside, it is good to see the other side of politicians, the less robotic side. It was not noted if or how much spent on the horses that day, but we’re sure she made some decent bets!

Churchill – the fella with the gift of the gab, the power to lead a nation through war – and a gambling problem.

We all know him as the hero, the man who defeated the Nazis, and changed the course of history. He’s a true legend in modern times. However, did you know he had a problem with gambling? From casino gambling to horse betting, to trading on the stock exchange, as well as taking on bets that made him sober for the whole year.

Churchill’s favorite go-to place to do a bit of cheeky gambling was the Hotel de Paris in Monte-Carlo. It is there that he accumulated one of the highest debts in his whole career in gambling.

The tale goes that one evening in 1939, while getting some well-deserved summer vacation away from the hustle and bustle of London, Churchill went to the Hotel de Paris’ Casino to de-stress.

Unfortunately, he was better at leading the country than he was at gambling, as his luck was once again nowhere to be found. Consequently, he began losing extortionate amounts of money. He kept losing more and more money, well into the early hours of the morning. It was so apparent that the casino director quietly and politely suggested that Churchill should stop.

Fair to say, this was definitely not Churchill’s finest hour.

Prince of Saudi Arabia: The raw truth about losing gambler

A truth about Majid bin Abdullah bin Abdul Aziz revealed. Bin Abdullah bin Abdul Aziz is the guy who gambles and loses. Once he succeed to lose five of his wives and as a addition he lost 22 billion rupees just during the 6 hours. According to the source arabicbet.org his favourite game was poker. Majid arrived to Sinai Grand Casino in Egypt where he lost all his money. But his passion to play didn’t reduce and prince made a decision to pdge 5 of his wives instead of money. As a result he lost all the games and had to leave his wifes in casino.

With all of this in mind, it shows that politicians can have a laugh and enjoy gambling like the rest of us. It’s always good to see a more fun side to politicians, however, don’t become a Churchill and turn to too much gambling. Keep things fun, and never bet more than you can afford to lose!

The opinions are those of the writer and do not necessarily represent the views of Ekurd.net or its editors.