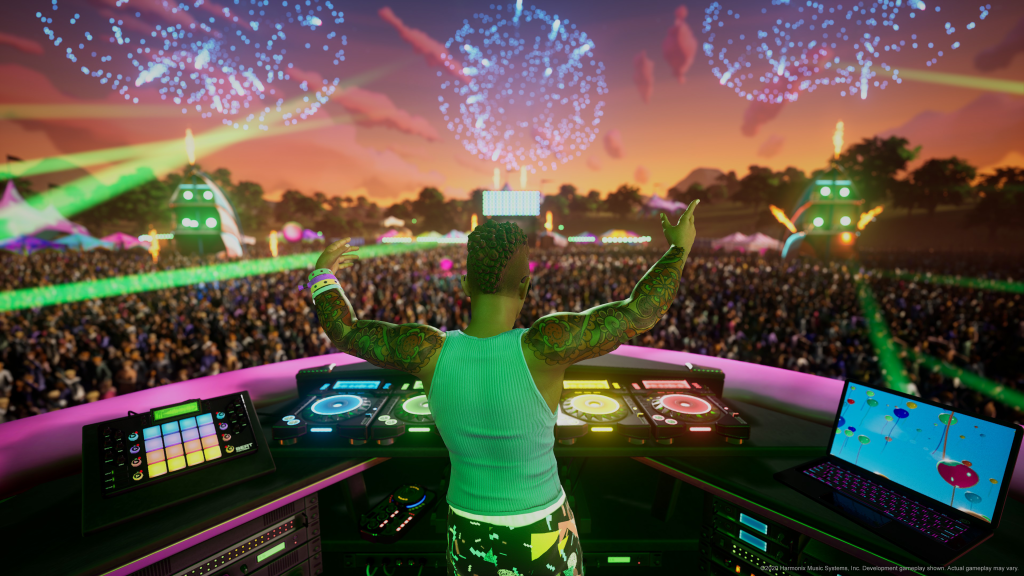 Smart developers don’t let good ideas go to waste. Instead of mothballing technology, they continue to refine it and that’s the case with Harmonix’s new project “Fuser.”

The backbone of the music-mixing games comes from “Dropmix,” a card-based title that Harmonix made in conjunction with Hasbro. It never achieved the same success as its previous efforts such as “Rock Band” or “Guitar Hero,” but the potential of the project was intriguing enough that they saw a future in it.

“The evolution of music games maps with Harmonix’s history,” said project manager Daniel Sussman. “My sense is that the world is ready for a rhythm-action game, where there’s more you can do than see button and press button.”

With “Fuser” players have creative agency as they play the DJ and mix music at festivals. Players have four tracks tied to drums, bass line, vocals and instruments. Harmonix splits most of the tracks into these four elements and they let players drop parts of them into the mix.

The technology adapts the tracks and blends them to a coherent song. It’s like magic. Tunes that may not go together suddenly find a shared beat where elements of the song bleed through. That’s the basis of both “Dropmix” and “Fuser.” But while “Dropmix” focused on competitive card competition as a way to discover mixes, “Fuser” is more straightforward and follows a path comparable to “Guitar Hero.”

As a DJ in the campaign, players have to follow the direction of a promoter who fires off requirements of a set. The promoter will ask players to to drop the bass line of “Don’t Fear the Reaper” into the mix or throw in two pop songs. At the beginning, players have ample time to complete the request, but as the difficulty increases, they’ll have shorter time to complete the task.

Thankfully, adding tracks is easy as scrolling through a crate full of music using the bumper buttons, highlighting a song and using the face buttons to add it to the mix. Each face button corresponds to the drums, bass line, vocals and instrument.

As players get used to the concept, the game will require them to learn more advanced techniques such as adding a track on the downbeat. This lets the change-up flow smoothly. At first, I had difficulty with it. The timing has to be precise and players will have to watch a beat bar and time their button press with the down beat. “Fuser” will require some calibration because the input lag between controller and screen will be noticeable and important to minimize.

The campaign adds more complexity as players get more fans for their performances and they’re taken under the wing of a new promoter at other festivals.

Further into the campaign, they’ll add samples to a mix. They’ll have to play a synthetic instrument but moving their cursor around a few square buttons while hitting A and X, and hopefully create a nice hook that’s added to the song. Elsewhere, they’ll be asked to isolate certain tracks like the vocals of “Call Me Maybe.” Players will also come across more complicated requests. Instead of asking for 2 pop songs, fans or the promoter may want an 80s track and a hip-hop track. If players know their music, they can find a tune that matches both.

For newcomers, the interface and the number of requests can be overwhelming. Players will have to keep an eye on the beat bar, shuffle songs, watch for requests and monitor the countdown for the tasks, but the campaign is all about teaching players the systems.

The creative agency is “Fuser” lies in the fact that players will eventually have a library of more than 100 songs and they’ll chose what to add to their crate. That’s the songbook for each performance. Initially, it’s limited, but as they keep advancing, players will unlock more songs. Because the requests in each level are broad — promoters ask players to put on a pop song or country music — players have leeway to decide wehat songs to mix and those choices mean no two performances sound exactly alike.

Like other Harmonix projects, a player’s performance in the campaign is scored on a five-star scale. The scoring is determined by whether players fulfill all requests promptly and if the execute it by dropping the tracks on the downbeat.

“Half of your score is determined by meeting goals,” Sussman said. “If you do that, you’ll get a certain amount of points. The other half is a function of your skill. Meet all the goals. Time all your drops well.”

“Fuser” also has a third element tied to scoring that Sussman calls freshness. It’s a crowd response to the tracks and protects against players choosing the same four tracks over and over again.

“In DJ culture, the pace of your music has an impact,” Sussman said. “Are you fast and furious or let it ride? You do get points for dropping disc. If you drop too many discs, your crowd meter drains too much. You’ll need to balance that. There’s no hard score cap.”

In an email, he further reiterated: “The campaign shows are designed not just to teach but also to provide challenge and help players develop their skill and style.  At a high level, our scoring measures the technical skill that you employ as opposed to a subjective rating of your creative decisions.”

The campaign and its challenges allows players to unlock certain in-game element. Their performances lets them open up new visuals for their festival performances. They’ll have new videos on Jumbotrons. They can grab more gear to make their DJ look more unique. In addition, each DJ has a plethora of body types and aesthetic options to customize their look. The goal is to let players put whatever persona they want on stage.

Sussman said that every time players jump in the game or level up they get tokens to earn additional content. They also earn experience points for playing multiplayer or saving and sharing mixes.

The ultimate goal is the Freestyle. Once players master all the techniques in mixing, they can go into this mode and express themselves. Players will be able to mute certain tracks, lower and raise the volume, change the key and fiddle with other options to make their mix just right. They can even make long 32 bar samples and deploy it on the track.

Because of its nature, “Fuser” is a game that seems tailor-made for streaming. Viewers can drop in and enjoy a mix and the fun visuals that the creator employs, but those who use Twitch or YouTube as a platform could run into copyright issues if they want to make money off their mixes.

“‘Fuser’ is a game that was designed to be shared, and we negotiated the rights for players to share non-monetized videos of their favorite mixes with friends and family,” Sussman wrote. “Players that are looking to monetize their gameplay on platforms like Twitch or YouTube will need to abide by each platform’s guidelines.”

From the sound of its potential, “Fuser” can be a new evolution of the music genre. One that takes int account other transformative changes going on in gaming such as streaming an user-generated content. Players will have their own turn at the tables when “Fuser” releases this fall on PlayStation 4, Xbox One, Nintendo Switch and PC.