Manchester City and Liverpool have lit up the Premier League over the last couple of seasons, landing some of the biggest points hauls the competition has ever seen and playing incredible, attacking football in the process. Many people regard newly-crowned Premier League Champions Liverpool as the best side in Premier League history. So who are they up against? We take a look at four of the greatest Premier League teams ever.

The only team to remain undefeated in English football’s top flight since Preston North End achieved the same feat in the inaugural football league back in 1888-89, Arsenal’s invincibles were a joy to behold. Arsene Wenger, then at the peak of his powers, actually called it as early as September of 2003 when he said;

“It’s not impossible as AC Milan once did it but I can’t see why it’s so shocking to say it. Do you think Manchester United, Liverpool or Chelsea don’t dream that as well? They’re exactly the same. They just don’t say it because they’re scared to look ridiculous but nobody is ridiculous in this job as we know anything can happen.”

With 12 draws throughout the season, the 90 points that Arsenal amassed isn’t close to the all time highest points tally in the league but the achievement of remaining unbeatedn means that they simply have to be considered as one of the four greatest Premier League teams of all time.

Their undefeated league run ultimately stretched for 49 matches when they were prevented for reaching their half century by Manchester United, who won the infamous ‘Battle of the Buffet‘ in which a slice of pizza was thrown at Sir Alex Ferguson by (allegedly) Cesc Fabregas. How the two clubs have fallen since those heady days!

Finishing with an incredibly satisfying 100 points, Manchester City’s 2017/18 haul broke the record for the most amount of points every recorded in a Premier League season. This included the seasons that came prior to 1995/96, when each team played 42 games instead of 38. 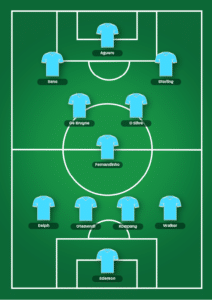 The amount of records that City broke was outrageous, setting benchmarks for the most away points (50), most wins (32), most consecutive wins (18), most goals scored (106) and best goal difference (79).

Really the only argument against this side being top of the greatest Premier League teams is the quality of opposition that they faced. With Manchester United, Arsenal and Chelsea all waning and their now rivals Liverpool only really finding  top gear in the second half of the season, would City have accomplished so much with stiffer opposition?

Regardless, they retained their title in 2018/19 with the second highest tally ever, 98 points, edging out Liverpool in one of the league’s most exciting climaxes. In the early stages of this campaign it does seem as though the Reds have finally taken over as the countries finest side but, should City somehow claw their way back to complete a hat-trick of titles, there can be little argument that they are the greatest.

Whereas the Arsenal and Manchester sides mentioned above were built on creative, attacking philosophies, the Chelsea side that rising star Jose Mourinho fashioned in his debut season in 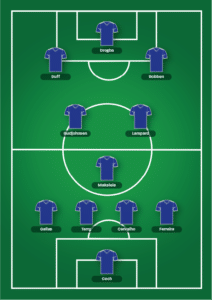 English football, 2004/05, were fashioned around a virtually impermeable defence and an ‘us against the world’ mentality.

That Chelsea only conceded 15 goals and kept 25 clean sheets, records which stand to this day, is almost beyond belief. Mourinho, who had freshly dubbed himself ‘The Special One’, turned Stamford Bridge into a fortress, kicking off an unbeaten home run that ultimately stretched for 86 games, five seasons later!

However, despite their defensive heroics, Chelsea were certainly no slouches going forward either. With the mercurial trio of Didier Drogba, Eidur Gudjohnsen and Frank Lampard scoring 51 league goals between them, The Blues finished the season with 95 points, at that time the highest in the competition’s history.

Whether that Chelsea side are the overall greatest Premier League side in history is open to debate but no side has, and probably will, ever surpass them defensively.

This list wouldn’t be complete with one of Manchester United’s teams, with The Red Devils undoubtedly the most successful club in Premier League history. 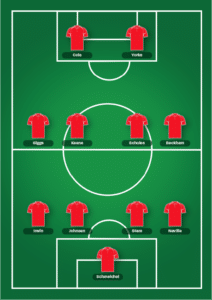 With a largely British and Irish core, it was a team which contained multiple players who are still in conversations for a Premier League All Time XI, including the entire midfield of Ryan Giggs, Roy Keane, Paul Scholes and David Beckham.

With the Alex Ferguson / Arsene Wenger rivalry nearing its peak, United won the league by just a single point. It was the first of a hat-trick of Premier League titles, a feat that is yet to be matched and, with Manchester City struggling to stay in touch with Liverpool this season, may not be matched for some time.

You could earn up to £100 (or currency equivalent) in bonus funds by joining Colossus with our New Player Bonus. Click here to join the action.