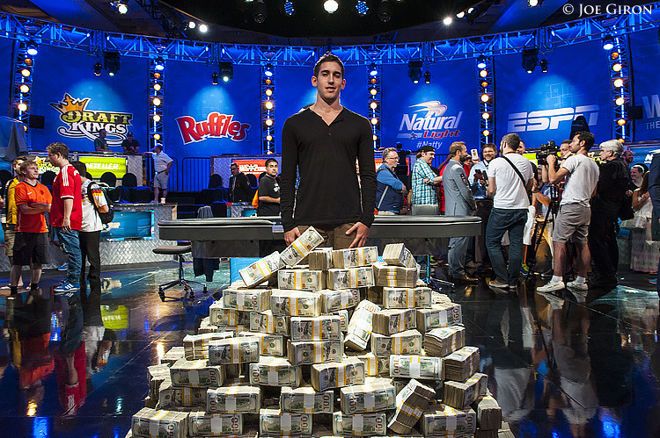 When the $1 million Big One for One Drop made history as the highest-stakes tournament ever held in 2012, the spectacle was grand and every part memorable, from the entrances right down to the iconic barefoot winner’s photo with Antonio Esfandiari holding stacks of cash aloft.

While nothing could ever really duplicate the magic of the first million-dollar tournament, anticipation remained nonetheless high for the second attempt in 2014.

Participation dipped slightly to 42 entries — down from 48 — but there was still $15.3 million on the line for first place. On July 1, 2014, the question of who would win that handsome and nearly unprecedented sum came down to an established superstar against a rising prodigy.

Tom Hall, like Salomon a veteran of high-stakes private cash games, bubbled out on the first hand in a lost flip to Negreanu when tens couldn’t hold against ace-queen.

Negreanu continued to pick up steam, scoring eliminations of Cary Katz, Scott Seiver and Reinkemeier, who took a big hit to his stack when he famously tank-folded aces to an all-in bluff from Seiver.

Meanwhile, Colman was able to double up when he got short and picked up aces against Christoph Vogelsang, who had pocket fives. Colman then busted Salomon when ace-ten got there against pocket eights to reduce the field to three.

Colman got the best of the three-handed play and held a slight lead when Negreanu eventually busted a super-short Vogelsang.

Each player had around 50 big blinds, setting up a potentially lengthy match between the name everyone in poker recognized and Colman, who had put his name on the map a few months earlier by winning a €100K event at EPT Monte Carlo. Many observers recognized Colman from his online sit-n-go prowess — under the moniker “mrgr33n13,” he had become one of the most successful players in the history of the format.

Negreanu moved in front early on and soon built a 2-to-1 edge. Seeking his seventh bracelet after nabbing two the previous year, he needed only to claim Colman’s final 30 blinds or so for the historic win.

However, Colman’s deep heads-up experience would make him a tough out. He inched back in front as they continued to battle over what would eventually be a two-hour match.

A decisive moment came when Colman opened with ace-four, flopped bottom pair, and three-barreled as he hit a runner-runner full house. Negreanu paid off all three streets after a river tank, and he was suddenly the one with about 30 blinds, which became less than 20 when the level bumped up.

Shortly after, Negreanu got it in with ace-four and flopped aces up against Colman’s king-queen. Colman still had a gutter, though, and he nailed it on the turn. Unlike his opponent, Negreanu was unable to turn his ace-four into a full house on the river, and he had to settle for second place and $8,288,001 while Colman won $15,306,668.

What could have been a star-making turn for Colman instead spawned some controversy as he infamously declined interview requests and posed for photos in which he looked far less thrilled than his predecessor Esfandiari to have just won millions of dollars.

Later, he’d write that he held reservations about promoting the game of poker due to its nature, which he described as “dark.”

Takes flowed hot in response, and it wouldn’t be Colman’s last bit of controversy in the spotlight. Months later, he’d don a shirt sporting a strong political message at another huge final table, leading to a PokerStars policy change. He made further headlines with an acidic take on the virtues or lack thereof in Phil Hellmuth.

In the midst of all that, though, Colman was adding millions more to his winnings. He never claimed WSOP gold again, and proved a scarce presence at the Rio in the years to come as he recorded only three more cashes. Of course, true to Colman’s amazing high-stakes form, those were worth almost $2 million.

Following July 1, 2014, when he made history at the WSOP, nobody could be surprised in the least by those results.