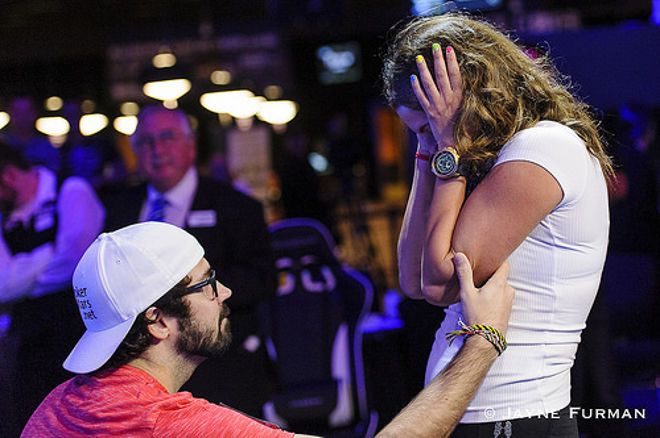 Not all memorable moments at the WSOP involve bracelet wins, millions of dollars changing hands and legacies being built.

Sometimes, moments are just about the people involved, and one such situation came up in 2016.

Mercier Switches to the Rail

Jason Mercier found himself on the heater of a lifetime in the 2016 WSOP. He had already collected two bracelets plus runner-up money in another event, and had fellow PokerStars Team Pro Vanessa Selbst seriously sweating a longshot bet that Mercier would win three pieces of gold that summer. He was the talk of the poker world.

However, for Event #59: $5,000 No-Limit Hold’em, he found himself in a most unfamiliar position that year: the rail.

That’s because Mercier’s girlfriend Natasha Barbour had made a deep run, entering the final day among just six remaining competitors and ranking third in chips. While Yue Du looked to be a large favorite to win the bracelet, Barbour was still in a great position making the final few out of 863 entries, guaranteed $132K and playing for $800,586.

No Bracelet, but a Ring Instead

While Barbour did ladder past a couple of opponents, she wasn’t able to get much going on the final day. She found a standard shove spot over the chip leader’s button open but her ace-five suited was dominated by ace-ten, and she found no improvement from the community cards, relegating her to a third-place finish.

Mercier headed to the stage and offered a hug and some whispered words of comfort. While that was fully to be expected, what he did next wasn’t: he sank to a knee and whipped something out of his pocket, offering it to Barbour as she put her hand over her mouth and turned away in shock.

After she said yes, the two shared another embrace as the crowd applauded. Barbour may have entered the day hoping for a bracelet, but she’d bagged a ring instead. Today, the two are still married with two children, and call themselves “semi-retired.”