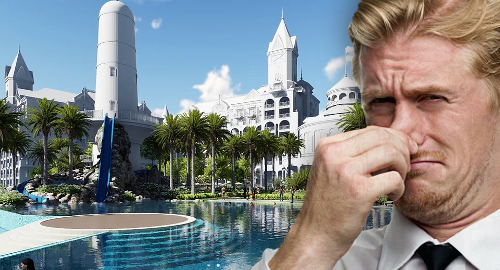 A long-delayed casino project on the South Pacific island of Tinian hit yet another snag this week after construction was ordered halted due to lack of permits.

On Wednesday, the Marianas Variety reported that the Commonwealth Ports Authority (CPA) and the Bureau of Environmental and Coastal Quality (BECQ) had ordered Bridge Investment Group (BIG) to stop work on its in-development Tinian casino project after failing to secure the proper permits from local officials.

According to CPA exec director Christopher Tenorio, the BECQ raised the alarm when it learned of BIG’s plan to construct a massive septic tank at the project site, which is adjacent to Kammer Beach, a popular tourist destination. The area has no adequate sewer system to handle a septic tank of the size envisioned in BIG’s plans.

The kerfuffle follows last month’s reports that the CPA was expressing reservations over BIG’s plans to construct an 80-room barracks for workers on the same site. The CPA reportedly suspects that BIG needs the barracks to house foreign workers rather than hire locals to learn the tools of the casino trade.

If you’re just joining us, BIG has been working on its $130m Tinian casino project since 2014. The project, originally dubbed Tinian Ocean Resort & Casino, is now known as either the Tinian Diamond Hotel & Casino or the Tinian Wyndham Ocean View Hotel & Casino and hopes to open to the public sometime before the end of the year (although we’ve heard that one before).

Before the grand opening, BIG reportedly plans to operate a small casino ‘training facility’, much as Imperial Pacific International opened a temporary casino in an upscale mall on neighboring Saipan while its permanent Imperial Palace venue was (and still is) under development.

BIG is also working on a fast-ferry service linking Saipan and Tinian, which are both part of the Commonwealth of the Northern Mariana Islands (CNMI). The Sand Diamond vessel, which will carry up to 300 people and over 30 cars, is supposed to launch in Q3 but that is the latest in another series of missed deadlines.

Tinian hasn’t had much luck with its various casino projects. The Tinian Dynasty Hotel & Casino shut down in 2016 when its owner went bankrupt and, while the property was later acquired by one of its creditors, has yet to reopen. Another project by Alter City Group had its gaming license suspended in 2018 after the company failed to pay its annual fee to the local government.